controversy over 'Farming the planet"...

what do we think about geo tinkery? 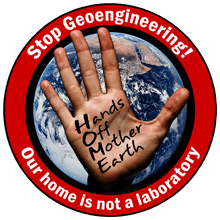 As huge cloud-whitening experiment goes public, global coalition urges an immediate halt to geoengineering
First UN talks on issue in thirty years begin today
http://www.handsoffmotherearth.org
Amidst revelations in this weekend’s London Times newspaper{1} that a team of scientists and engineers funded by billionaire Bill Gates are planning to carry out a 10,000 square kilometer field trial of controversial “cloud-whitening” technology, over one hundred civil society groups are urging governments meeting on biological diversity in Nairobi to stop risky geoengineering experiments now. Geoengineering refers to large-scale technological schemes to intentionally alter the planet’s systems as a quick fix for climate change.
The San Francisco based “Silver Lining Project” directed by entrepreneur Kelly Wanser has so far received $300,000 from Bill Gates to develop technologies that will increase the whiteness of marine clouds. Theoretically, executed on a massive scale, whiter clouds could increase the earth’s albedo, reflecting more sunlight back to space and thereby reduce global warming (without changing the composition of greenhouse gases which cause warming). The Silver Lining Project has decided to press ahead with plans to alter cloud-cover over an undisclosed 10,000 square kilometre patch of ocean (as large as the BP oil slick was a few days ago). If not stopped, the Gates ‘cloud-bleaching’ experiment would be the largest known geoengineering field trial to date. Its effects could include changes in rainfall and other altered weather patterns. Among the sites frequently spoken of by scientists engaged in this research are the Pacific coasts of North and South America (specifically California, Ecuador, Peru and Chile).
Most worrisome, the Times revealed: “The British and American scientists involved do not intend to wait for international rules on technology that deliberately alters the climate.” Such rules could be set in motion this week as scientists and diplomats from 193 nations meet under the auspices of the UN Convention on Biological Diversity’s scientific body. The meeting in Nairobi of SBSTTA 14 (Subsidiary Body of Scientific, Technical and Technological Advice, running from May 10-21 2010) is the first time a UN Body has addressed geoengineering as a whole since the signing of the ENMOD Treaty in Geneva in 1976 that banned environmental modification for “hostile uses”.[2]
A new global coalition will be urging governments in Nairobi to adopt a moratorium on all geoengineering experiments, just as the UN Convention on Biological Diversity adopted a moratorium on ocean fertilization in 2008. Over one hundred organizations and individuals, including leading names in the environmental and global justice movement have joined H.O.M.E. campaign: Hands off Mother Earth--Our Home is not a Laboratory (www.handsoffmotherearth.org).
“Our Home Planet Earth should not be treated as a laboratory for risky geoengineering experiments,” says Silvia Ribeiro of ETC Group in Mexico from the Nairobi SBSTTA meeting. “Human-caused climate change already threatens our lands, seas, food supply and rights. We do not want to embark on another dangerous experiment with our planet. If they think that the people and governments of Ecuador, Peru or Chile – or anywhere else they might try – will stand idly by as they mess with our oceans, clouds and weather, they are in for a surprise. Delegates here are shocked by these plans.”
“We knew Microsoft was developing cloud applications for computers but we didn’t expect this,” explained Jim Thomas of ETC Group, one of the founding organizations of the HOME campaign “Bill Gates and his cloud-wrenching cronies have no right to unilaterally change our seas and skies in this way. A global moratorium on geoengineering experiments just became a whole lot more urgent and the meeting in Nairobi is a fine place to ensure that it gets put into place rapidly.”
-30-
Additional background:
What: Geoengineering refers to large-scale technological proposals to fix climate change by deliberately altering the climate, weather, atmosphere and oceans. Examples of geoengineering schemes include dumping nutrients into the sea to grow algal blooms (called Ocean Fertilization), turning extensive monoculture plantations into charcoal to bury in the soil (called biochar) and deliberately polluting the upper atmosphere with sulphur or aluminium particles to reflect sunlight (called stratospheric aerosols) as well as cloud-whitening. All of these experiments have large potential impacts on environment, biodiversity and the livelihoods of people especially in the Global South. Geoengineering advocates argue that there is no time for a global political agreement to address the real causes of climate change, so brave new scientists and wealthy entrepreneurs should save the world for all of us instead, with their own technofixes.
There are now several geoengineering experiments getting underway without any global oversight framework in place and larger experiments are planned. Geoengineers, including those behind the Gates cloud-wrenching test have recently proposed “voluntary guidelines” rather than full independent multilateral oversight of the field. The proposal currently before SBSTTA 14 is for governments to look into the biodiversity implications of geoengineering (as well as to examine the ongoing work on ocean fertilization which began in 2008). Civil society groups are insisting experiments be stopped while governments examine the implications of such research.
Who: A new global campaign and coalition to stop Geoengineering experiments was launched last month at an international climate change meeting in Cochabamba, Bolivia. This Hands Off Mother Earth (H.O.M.E.) Campaign is calling on governments through the UN to put a halt to unilateral open-air geoengineering experiments – arguing they are too risky and unjust. Supporters of the HOME campaign against geoengineering include high profile environmentalists such as Bill McKibben, David Suzuki, Vandana Shiva and Naomi Klein. Organizations supporting the HOME campaign include ETC Group, Friends of the Earth International, Third World Network, Indigenous Environmental Network, la Via Campenina, Asian Indigenous Peoples Pact, Biofuelwatch and many others.
Show of Hands: Additionally members of the public have been uploading their pictures with their hands held up with messages against geoengineering to a growing photo petition at http://www.handsoffmotherearth.org. A giant poster displaying the protest is on display at SBSTTA 14 in Nairobi and ETC Group has three people at the meeting, working with campaign partners to inform delegates of the protest and the reasons behind it.
For more information about Hands Off Mother Earth Campaign see
http://www.handsoffmotherearth.org