Stratford couple voted Canada’s Outstanding Young Farmers for 2009
By DAVE STEWART
The Guardian
Canada’s top farmer prefers to think of himself as a technologist, an entrepreneur.
“The term farmer is getting to be an outdated term,’’ Greg MacKenzie of Stratford said in an interview Monday, a day after he and his wife, Tania were voted Canada’s Outstanding Young Farmers for 2009, open to farmers aged 18 through 39. 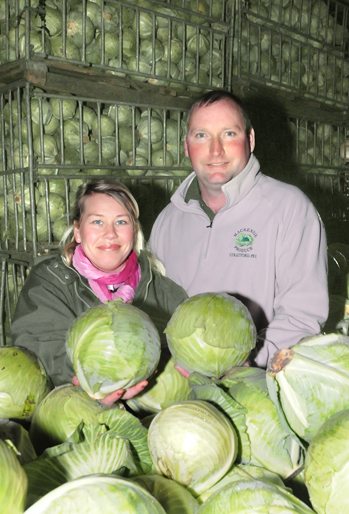 The couple, owners and operators of MacKenzie Produce in Stratford, won the national title in Ottawa on the weekend. They were chosen by a panel of judges from a group of seven regional finalists. The Stratford couple shares the title with Grant and Colleen Dyck of Niverville, Man.
“You have to be an expert in so many things and with so much technology. You have to be able to specialize in so many things (and have) such an umbrella of different people at your disposal.’’
MacKenzie Produce is a 115-acre cole crop vegetable farm.
Greg MacKenzie, who grew up on a beef farm, found his calling one day when he went out to help at a friends’ vegetable farm. He stayed and worked his way up to farm manager at Balderston Produce and, after 10 years, was presented with the opportunity to purchase 75 acres of the cole crop production, warehouses and farm house.
Greg and Tania assumed ownership in 2003 and since then have made numerous upgrades — joining the storage and grading warehouses, constructing a new loading dock, grading rooms and a new refrigerated warehouse to store produce year round instead of renting warehouse spaces. Cabbage, broccoli, turnips and cauliflower were the main produce marketed by Balderston Produce. Since Greg and Tania took over, they’ve increased the acreage to 115 acres and added peas, beans, pumpkins, gourds and cucumbers.
Cabbage is now the main crop and is stored and marketed year-round. In fact, the MacKenzie warehouse currently has more than three million pounds of cabbage in storage.
continue reading here