bent by the sun

A super visual essay! With a solid written component as well.  Looking at lessons from Japan's ancient tradition of sustainability. 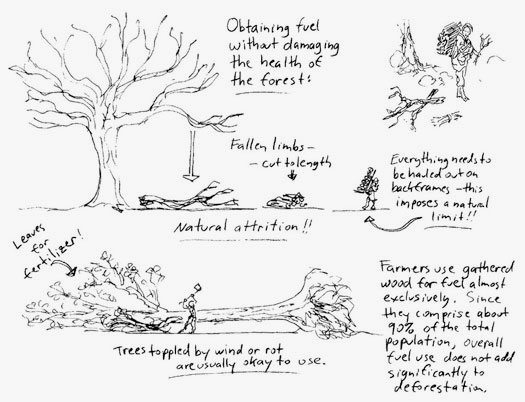 By Azby Brown
Sometimes a simple investigation can lead us along an unexpected path. This spring I will have lived in Japan for 25 years, as a student, artist, designer and teacher. My interests here have taken me from a study of traditional architecture to a long, deep look at the urban development of Tokyo to several books on manufactured housing and small-footprint dwellings. But it has only been recently that the thread that unites these varied areas, a seemingly inexhaustible vein of connected and sometimes startling ideas, has become clear to me. It's not simply "design in Japan." Rather, I feel I somehow stumbled upon a set of widely applicable design principles of the sort we now urgently need.

I was initially drawn to Japan by its carpentry. Having grow up in New Orleans, I felt I had an ingrained sense of the continuities that bind life in past eras with our present, and Japan, with its vastly deeper history and cultural longevity, promised a valuable window into a form of knowledge that had been lost elsewhere. I was drawn to Japanese carpentry by its beauty, which seemed to me to lie primarily in its puzzlelike complexity and the virtuosic skill that its craftsmen wielded. That it appeared to be a physical embodiment of Buddhism was an added attraction, as was the ethical code and discipline that shaped the carpenters' worldview. For a child of the ’60s embarked on a psychic journey, a temple carpenter's workshop in Nara was a good stopping place, and looking back, I realize that what seemed at the time to be incidental conversations with craftsmen were in fact formative experiences that have led to my current immersion in the world of Japanese sustainability.
The first crucial conversation was about time. Tsunekazu Nishioka, considered the last of the great Japanese temple carpenters, at whose workshop I studied for three years, was telling me how dismantling a 1300-year-old temple provided him the opportunity to study the ring structure of the old columns, which he estimated had been cut when they were 1000 years old. "So," I observed, “the tree was 1000 years old when the temple was built, and the temple is 1300 years old now, so in all we're talking about a time span of 2300 years.…" "Yes," he replied. "And compared to that, a human lifespan is next to nothing."