an irresistible fleet of patriots

with iconic hats. what more can we ask for , really.
oh yes, their cause: noble 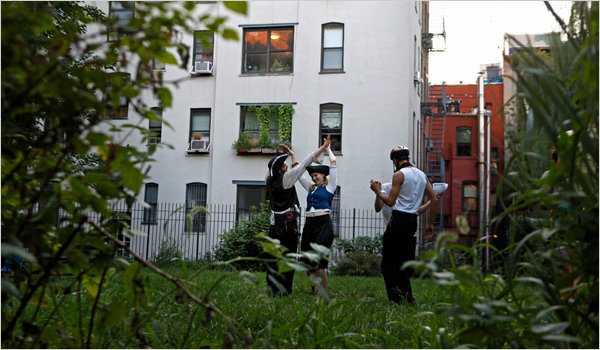 photo from the New York Times

‘The Bulldozers Are Coming’: Garden Crusaders Hop on Their Bikes
By COLIN MOYNIHAN
Published: August 1, 2010
The bikes departed Tompkins Square, pedaled by men and women dressed in 21st-century thrift-store versions of 18th-century garb. There were tricorn hats, vests and, in a few cases, shirts with long, flowing sleeves. Many of the bicycles were decorated with cardboard cutouts in the shape of a horse’s head. One man rang a bell. Others shouted to passers-by on Avenue B, calling out, “The bulldozers are coming.”
The procession was modeled, of course, on Paul Revere’s nighttime ride to Lexington, Mass., in 1775. But the riders on Thursday night meant to warn people not about an invading military force, but about proposed rules by the city that would alter the status of hundreds of community gardens.
Since 2002, community gardens have been regulated by an agreement that designated about 150 gardens for development but preserved or increased protections for about 500 others. That agreement, which was reached after the state attorney general sued the city to block the sale of gardens to developers, will expire in September. Although city officials have said they have no plans to develop gardens, rules proposed by the Department of Parks and Recreation and the Department of Housing Preservation and Development do not include any guarantees of preservation.
continue HERE