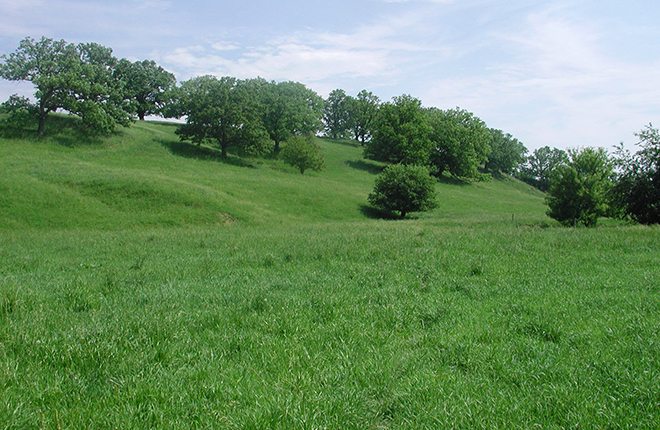 A forgotten forage grass imported from Europe in the 1800s could soon begin to help boost cattle and dairy production in parts of the Upper Midwest. U.S. Department of Agriculture (USDA) scientists in Madison, Wisconsin, recently released the grass for commercial production.
The grass, named "Hidden Valley," was discovered on a farmer's shaded hilltop in a long-time pasture that had never been seeded with commercial forages. Cattle thrived on the grass, and it gradually spread from the hilltop into gullies and open areas. The farmer fed hay made from the grass to more cattle and spread the seeds in the manure. He also eventually began consulting with Michael Casler, a plant geneticist with USDA's Agricultural Research Service(ARS).
Casler and his colleagues at the U.S. Dairy Forage Research Center spent more than a decade evaluating Hidden Valley, named for the farm where it was discovered. They found that cattle digest it more easily and eat more of it than other forages, thus gaining more weight when it's available and producing more milk.
DNA tests show that the grass is a meadow fescue that has adapted to the Upper Mississippi River Basin since its arrival in the 1800s. It is drought tolerant and will survive freezing temperatures and repeated grazing. Surveys of the Upper Midwest "Driftless Region," which includes parts of Illinois, Iowa and Minnesota, show that the grass can be found in a wide range of habitats. It also grows well on land taken out of crop production and allowed to revert to pasture.
To read more, click HERE!