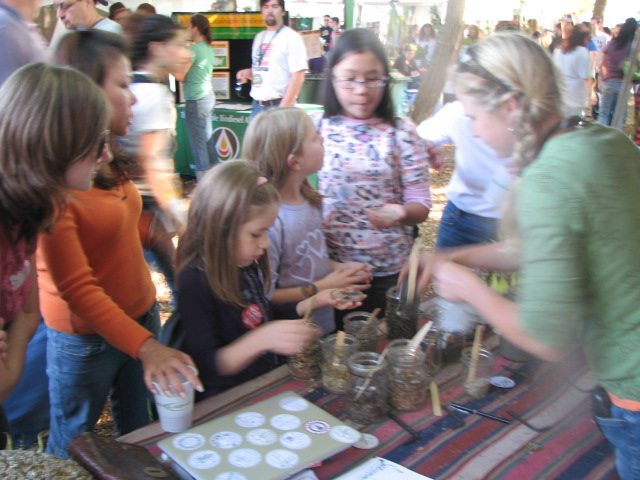 Bicycle powered blender and all, the Greenhorns seed balled it up at the 23rd annual Farm Aid concert last weekend.The Farm Aid concert, held this year outside of Boston, was founded in 1985 by Willie Nelson, Neil Young and John COUGAR Mellancamp. Its purpose: "to raise awareness about the loss of family farms and to raise funds to keep farm families on their land."
A simple mandate, but a decidedly bold one in an era of historic farmland loss, farmer attrition and consolidation in the agricultural sector. During the 1980s we were losing 212 farms per week. We still lose 1 million acres of farmland per year to development, 40,000 of those acres in California alone, on some of the most productive soils in the nation.
Working to reverse this trend is the longest running concert benefit series in the nation. Its a temple of sanity and real American values, held aloft by the vision and persistence of its founders. This year, in addition to the four main rockstars, there were performances by Dave Matthews, Kenny Chesney, The Pretenders, moe., Arlo Guthrie, and some of our personal favorites (due to friendly encounters with band members) Nation Beat and One Flew South. Because of its talented line up-who's fans span generations-Farm Aid never fails to reach venue capacity (20,000 people this year) and has raised more than $30 million towards promoting a sustainable, people based agricultural system. Funding the farmer support groups that do research, networking, training and political organizing to keep family farmers afloat. 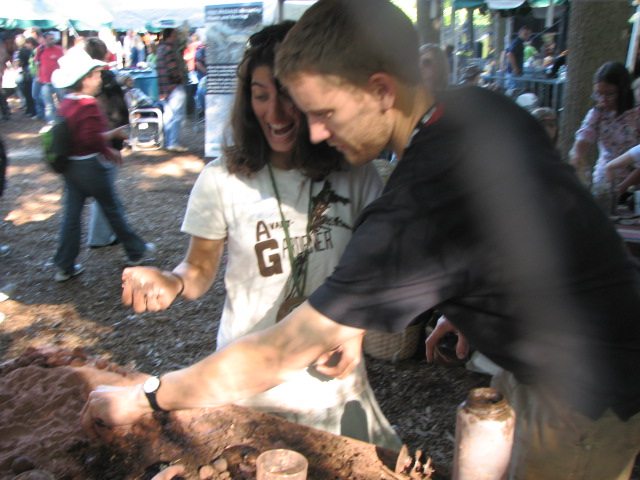 The concert was an all day affair- and a bit of a marathon for us. The Greenhorns were stationed in "Homegrown Village," where we spent the day helping people play with dirt.
Actually our booth was called "Bike-powered Seed balls." Using a custom outfitted Xtracycle bike with a Bikeblender attatchment, we mixed compost, clay and seeds together into a brownie mix consistence, then rolled the balls with our fingers, dusted them with clay (like truffles) and send the folks home with a wax baggie full of biodiversity projectiles and seriously dirty fingernails.
Severine had spent the past month opportunistically collecting pioneer seeds in backyards, sides of roads, fields and pastures on the east coast. Visitors to the Greenhorns table picked out their seeds from our wildcrafted selections and headed to the mixing table to encapsulate their seeds. The compost in question came from the localist, littlest, sweetest, youngest farmers we knew: Christie Raymond came about 10 miles to the concert from her farm in suburban Wrentham: White Barn Farm. It was seriously fun, especially the kids loved taking sunflower seeds right off the sunflower heads.
"I haven't gotten to do something this fun since kindergarten!" a middle aged man exclaimed to me. 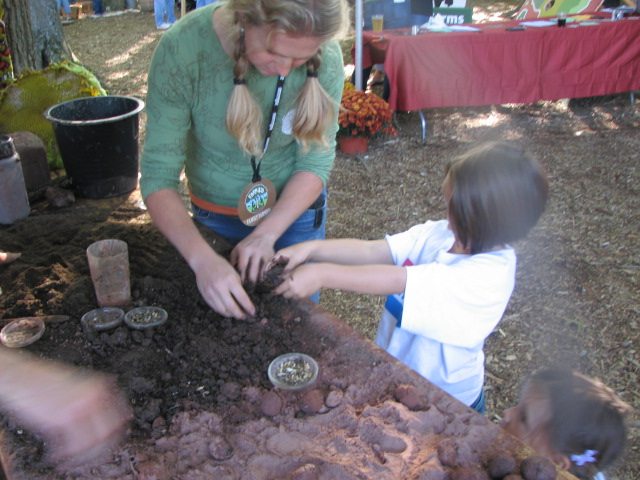 People took home their seed grenades as presents for relatives or stow-aways til spring when they will toss them to barren land (urban or rural) that looks like it needs some re-vegetation, and an ecological succession jumpstart. With no maintenance, these seeds, (calendula, coreopsis, mullein, daikon, clover, wild parsnips etc) which are beneficial to insects and soil composition, will sprout! Flowers are dancing ground for the butterflies, roots are a lovely respite for the working worms, et voila! Soil damaged by pavement, petrochemicals and abandonment has a chance for renewal.
Seed balls are an ancient farming technique and were reintroduced as a method of natural farming by the late Masanobu Fukuoka (also the name of our grey cat). Symbolically, we feel that planting a seed somewhere and watching it grow--is a powerful first step. It is an easy little gesture, and hopefully an inspiration to extend the boundaries of stewardship in our lives, so that we begin reaching out, reclaiming and retrofiting the spaces in which we live.
In any case, we turned out to be media darlings (a nice mention during the press conference didn't hurt) and so the booth was crowded with flash cameras as well as middle-schoolers, and towards the end of the afternoon, a few beer-bellied enthusiasts as well. As it turns out, seed balls are for everyone.
Stay tuned for more Greenhorns bike blender expeditions...