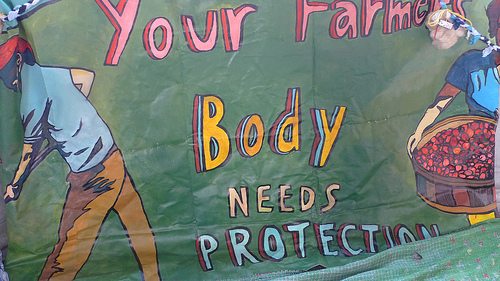 Lyons, NE - Today the Center for Rural Affairs announced their opposition to the farm bill agreement reached by the House and Senate Agriculture Committees to be submitted to the Super Committee - the House and Senate Joint Committee charged with reducing federal budget deficits.
“The farm bill proposal by congressional agriculture committee leaders represents the worst aspects of federal policy,” said Chuck Hassebrook, Executive Director of the Center for Rural Affairs. “It increases subsidies for the rich and powerful and cuts investment in the future of rural America, jobs and opportunity for rural people.”
“The growing cost of crop insurance subsidies to mega farms was left unchecked,” Hassebrook continued. “If one corporation farmed an entire state, the federal government would pay 60% of its crop insurance premiums on every acre in every year - the better the year, the bigger the subsidy."

“Moreover, the rural development cuts are devastating,” said Hassebrook. “Small business, small town and rural community development would be cut to less than one-tenth of the average of the last two farm bills.”
According to Hassebrook, all funding has been eliminated for the Rural Microentrepreneur Assistance Program – the one USDA program supporting loans, training and counseling for rural small business.  Beginning farmer and rancher assistance was also reduced. However, this farm bill proposal was written for inclusion in larger budget cutting legislation and if that stalls, so does this farm bill.
“That’s fitting,” added Hassebrook. “This farm bill is not worthy of advancing. This bill deserves to die.”
Hassebrook further explained concerns about key elements of the proposal, including:

“Any serious reform of federal farm programs must cap federal crop and revenue insurance subsidies to mega farms,” said Hassebrook. “They are the most expensive element of farm programs, costing $7 billion annually. And this proposal ensures that these subsidies remain completely unlimited, covering every acre, every year, no matter how large a farm operation gets.
“This legislation does not reflect the priorities of rural America. It does not address the needs of the thousands of rural communities fighting to create a future for the next generation of rural people facing unemployment through no fault of their own,” Hassebrook concluded. “Increasing subsidies for mega-farms while slashing investments in our people and our future does not reflect the values of rural America.”
###