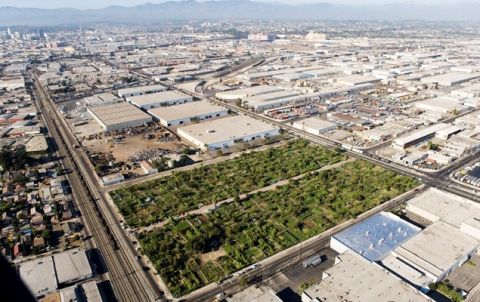 The South Central Farm/ers: The Dream Reborn
The Los Angeles Times editorial board recently announced its support for restoring the South Central Farm (see below), once a fourteen-acre miracle of family agriculture in the heart of industrial Los Angeles. What the Times isn't saying here is that the land that was the Farm is in escrow according to reports received by the Farmers, with only four months left to find a way to return the Farm to the community before the land is sold. The Farmers are again relying on Angelinos to come to the aid of the legendary urban farm.
The South Central Farm is one of those rare causes that, in 2006, united Los Angeles across racial and generational divides. Thousands of people, some who had never been to South Central and others who lived there, stood in line side by side to hear Zack de La Rocha and Son De Madera do a benefit concert for the Farm. Tens of thousands contributed time and money to save the agriculture paradise they had "discovered" wedged between the train tracks and the trucking corridor. Word spread around the world and found support from farmers from South Africa to Oaxaca. Day after day, the ordinary and the famous, from Willie Nelson to Ralph Nader to Joan Baez to Danny Glover, made the pilgrimage to the Farm and tasted air that was palpably fresher, cleaner inside the chain link fence. Environmentalists Daryl Hannah, John Quigley, and Julia Butterfly Hill climbed trees and took turns in perches until the sheriffs drove two hook-and-ladder trucks across the crops to pull the tree sitters down. Hundreds who had camped on the land for weeks after the eviction notice were run off, and over forty-four protestors were arrested.
The Farmers' mission was and remains to provide fresh food to the food desert that is South Central Los Angeles. Today, they truck in food grown on their farm in Bakersfield, but they hold fast to the promise they made to the South Central community and all of Los Angeles back in 2006: Aqui estamos, y no nos vamos. We are here, and we're not leaving. The Farmers stand ready to restore the Farm.
The fight for green space, for community space, in recent years has coursed from Taylor Yard to the Cornfields to Ballona Wetlands to the South Central Farm. The Farm was a glimmer of beauty, a source of pride for a poor community and for a mostly concrete-covered urban metropolis. The land sits fallow, waiting to be a Farm again. To make that happen in just four months, the Farmers call on all of Los Angeles to help quickly.
The South Central Farmers are asking that everyone who has heard the story of the Farm take two actions now:
1.        That you join the Farmers' mailing list
2.       and that you write to the Los Angeles City Council and our local politicians to ask them to Stand Up and support the restoration of the Farm.
read the editorial HERE