Public Radio International is distributing this series highlighting five American farmers. Listen to the audio, look at the pictures, read about the farmers.  it's good work.
When we slice a tomato, open a box of frozen spinach, peel an orange at breakfast, order a BLT from the lunch counter around the corner, or select a turkey for a holiday dinner, our lives become linked to farming families who may live in the next town or thousands of miles away. By exploring this website, you can learn about the lives of five families who work to provide the food we all depend on. 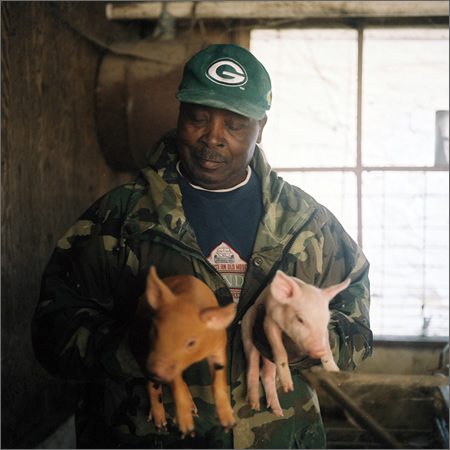 The farming families who are profiled in this project --- they live in Massachusetts, North Carolina, Iowa, Arizona, and California --- share their experiences in the audio stories and pictures on this website; in a series of five one-hour radio documentaries on public radio stations nationwide, available in May 2009 from PRI, Public Radio International™ (check local listings); and in a series of radio features first heard on National Public Radio's™ All Things Considered ™ (click on "Listen").
Five Farms is about making connections between the food on our tables and families in New England, the South, the Midwest, the Southwest, and on the West Coast who produce it --- farming people who protect the tomato from insects, harvest the orange in a California citrus grove before a killing frost, risk acres of corn and soybeans through unpredictable Iowa floods, help a struggling hog give birth to new piglets one hot North Carolina afternoon, milk the dairy herd in the New England pre-dawn darkness, or cultivate crops in an arid desert according to Native American traditions valuing conservation and protection of precious resources.
Five Farms puts a personal face on the lives and livelihoods of farmers across the country. We get to know people who work hard and make considerable sacrifices, but who also flourish, and for whom the benefits, including a deep understanding of the land they work, are rich. Through their own voices and direct experiences, we learn details of farming life and get to know members of each family --- their personal struggles, triumphs, hopes, dreams, and challenges. We learn what it takes to farm and produce the food that we count on when we go to the market.
The locations for the Five Farms series were carefully chosen to reflect the agricultural, cultural, historic, and geographic diversity of farming in America. They are in western New England, central Iowa, eastern North Carolina, California's Capay Valley, and the Hopi Reservation in northeastern Arizona. Beginning in March 2008, field producers and photographers in each of the locations recorded farmers' stories over the course of a yearlong cycle of seasons. The results are here for you to explore.
Five Farms is produced by Wesley Horner Productions and the Center for Documentary Studies at Duke University, and distributed by Public Radio International™.