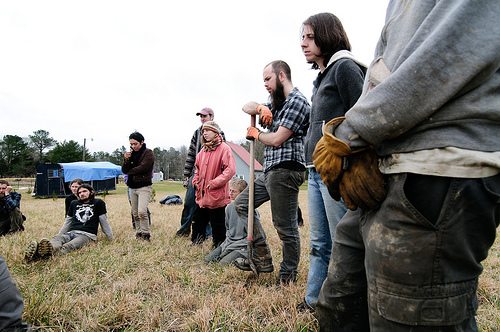 By: Christine Muhlke
“Who brought their own wheelbarrow?” Rob Jones asked the group of 20-somethings gathered on a muddy North Carolina farm on a chilly January Sunday. Hands shot up and wheelbarrows were pulled from pickups sporting Led Zeppelin and biodiesel bumper stickers, then parked next to a mountain of soil. “We need to get that dirt into those beds over there in the greenhouse,” he said, nodding toward a plastic-roofed structure a few hundred feet away. “The rest of you can come with me to move trees and clear brush to make room for more pasture. Watch out for poison ivy.”
Bobby Tucker, the 28-year-old co-owner of Okfuskee Farm in rural Silk Hope, looked eagerly at the 50-plus volunteers bundled in all manner of flannel and hand-knits. In five hours, these pop-up farmers would do more on his fledgling farm than he and his three interns could accomplish in months. “It’s immeasurable,” he said of the gift of same-day infrastructure.
It’s the beauty of being Crop Mobbed.

The Crop Mob, a monthly word-of-mouth (and -Web) event in which landless farmers and the agricurious descend on a farm for an afternoon, has taken its traveling work party to 15 small, sustainable farms. Together, volunteers have contributed more than 2,000 person-hours, doing tasks like mulching, building greenhouses and pulling rocks out of fields.
“The more tedious the work we have, the better,” Jones said, smiling. “Because part of Crop Mob is about community and camaraderie, you find there’s nothing like picking rocks out of fields to bring people together.”
The affable, articulate Jones, 27, is part of the group’s grass-roots core, organizing events and keeping them moving. The Mob was formed during a meeting about issues facing young farmers, during which an intern declared that better relationships are built working side by side than by sitting around a table. So one day, 19 people went to Piedmont Biofarm and harvested, sorted and boxed 1,600 pounds of sweet potatoes in two and a half hours. A year later, the Crop Mob e-mail list has nearly 400 subscribers, and the farm fests now draw 40 to 50 volunteers.
The Crop Mob works well partly because the area around Chapel Hill, Raleigh and Durham is so rich in small-scale, sustainable farms, and the sustainable-agriculture program at Central Carolina Community College draws students from across the nation who stay put after graduation.
One of the biggest issues facing sustainable agriculture is that it’s “way, way, way more labor-intensive than industrial agriculture,” Jones said. “It’s not sustainable physically, and it’s not sustainable for people personally: they’re working all the time and don’t have an opportunity to have a social life. So I think Crop Mob brings that celebration to the work, so that you get that sense of community that people are looking for, and you get a lot of work done. And we have a lot of fun.”
“It’s good to get off the farm you’re farming,” said Jennie Rasmussen, a 25-year-old Indiana native who traded an office job for community gardening before moving to the area to farm. “It’s great to meet other people who have the same challenges and just network and build community.”
“Networking” and “building community” popped up in almost every conversation I had that day, and it never came across as slick or earnest. Both have real context here, as these mostly farmless farmers hear about internships, learn about affordable land and find potential dates. For those who don’t farm, it’s a way to explore getting their fingernails dirty. One woman, who recently moved to the area from New Jersey after losing her job in the financial-services industry, was eager to plug in to the vibrant local food scene. “I’m trying not to hinder the effort,” she said with a laugh as she distributed twigs on a hügelkultur bed made from dead trees.
The farmer Trace Ramsey, who is part of the Mob core as well as its documentarian, has watched the young-farmer phenomenon explode. “People are interested in authentic work,” he said. “I think they’re tired of what they’ve been told they should accomplish in their life, and they’re starting to realize that it’s not all that exciting or beneficial from a community perspective or an individual perspective.” At 36, Ramsey joked that he’s the old man of the project — remarkable considering the average American farmer is 57. But as people of all ages become involved, he said, “what started as a young-farmer movement is just becoming a farmer movement.”
By the end of the afternoon, the transformation was remarkable. The towering piles of soil and mulch had dwindled to child’s height. The greenhouse beds were filled and the walls framed out by older volunteers who knew what to do with the table saw. The Tamworth pigs had a new fenced-in grazing area to uproot. Thickets and trees were removed from the edge of a field, a bonfire built from the haul. Garden rows were tidied while someone sang. And the hügelkultur beds were handsomely finished. The dreary mess of winter had been cleared to make way for a well-ordered spring.
There was even time for a pecan-tree-planting demo before the buffet lunch. (Farmers are required only to feed the workers; no money is exchanged.) Tucker, bleary from exhaustion, thanked the smiling gang. The group then threw around ideas for which farm should be Mobbed next. When it was agreed that a volunteer’s employer would win the reciprocal-labor lottery, she hopped around in excitement.
The idea is catching on, Jones said. Requests for advice on starting mini-Mobs have come in from around the state. Two Crop Mobbers are traveling to Spain to talk to farmers. In cities, Jones added, there’s no reason that backyard and community gardeners can’t mob, too. Because anywhere there’s dirt, a community can grow.
http://www.nytimes.com/2010/02/28/magazine/28food-t-000.html?hpw