article by a dairyman 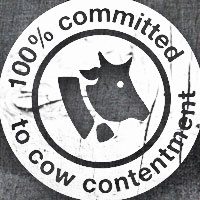 David Finlay - 11 March 2014
I’m afraid this isn’t an article about how our broken food system is driving climate change, biodiversity loss, diffuse pollution, resource depletion, anti-biotic resistance, animal and social welfare degradation, ill health and food insecurity. And it’s not about how someone (else)should do something about it. I assume you know all that, and many, like me, have stopped reading these articles because, well, because they’re really quite depressing. Especially so, as there is little we can do about it….
No, this is a good news story. It’s about how we are going to have a damn-good go at coming up with an alternative food system that, to a large extent, addresses all those issues we worry about.
And when I say ‘we’ I mean exactly that – me and YOU.
Don’t worry, I’m not expecting you to get up at 4.30am to milk the cows. Nor get up at 2am to calve that awkward heifer – though you could if you want. No, I’d be happier to do that bit. But I DO want you to be involved.
OK, let’s just imagine that we could come up with a system of dairy farming (relative to your average dairy) that:

And yet is NO MORE EXPENSIVE to produce than industrially produced food!!
Wouldn’t you want to be a part of that revolution? Because, believe me, it IS a revolution!
You see, over the past 10 years, or so, we’ve been dismayed by the complete disconnect between what is happening on the ground with our ‘food industry’ and these growing issues. We see GMOs, greater intensification and industrialisation, feed additives and other techno-fixes being offered as a solution when the facts suggest they are part of the problem. I see little point in wasting precious time and resources fine tuning the current food system, when the speed and scale of the approaching crises demands a fundamental SYSTEM change.
So over those ten years we’ve begun to put together a farming model, based around ruminant animals on marginal land unfit for food crops (yes, that describes our farm), which could conceivably deliver the outcomes listed above. I have presented our ideas to farmers, scientists, politicians and members of the public. While most of the public think it’s a great idea, few in the industry believe (or want to believe?) we can pull this off. Well I told you it was a revolution.
Last winter (2012/13) we trialled the full system for the first time with 40 of our dairy cows for 6 months. Like most revolutions it didn’t happen without blood-shed. It’s OK, it was just my blooded nose! Time for a re-think.
The trial taught us a lot. Part of it involved leaving the cows and their calves together until natural weaning, but still milking the cows. The difference in cow and calf behaviour towards each other, towards us and even towards Meg, my Collie, compared to normal, where calves are removed from their mothers shortly after birth, was quite remarkable. All the animals were less aggressive and more confident with each other and with us.
That experience has increased my determination to make this system work around allowing the calves to remain with their mothers. Compassion in World Farming had heard about our experiment and gave us a visit half way through – awarding us its Good Dairy Award for our efforts (the first in Scotland).
But we had many problems with the suckling part of the system, and we were forced to end the trial after 6 months. These problems are not insurmountable, and we are making the changes required to enable us to move to the full system with the whole farm for the winter of 2014/15.
Another part of the model is an anaerobic digester. Again, our one is a prototype. It is simple, robust, farmer friendly and about one third of the cost of normal industrial ones – bringing it within financial reach of many livestock farmers, I hope. This turns plant-based waste from the farm together with our slurry into a more useful and less environmentally damaging fertiliser, while also producing all our electricity and hot water requirements, and more.
The good news is that, once we crack the management issues we encountered during last winter’s trial (and I am now certain that we can do that), we will have pretty well achieved all the targets set out above. To ensure we don’t kid ourselves, we have been working in partnership with Glasgow Caledonian University, The Scottish Rural University College, Scottish Natural Heritage, Glasgow Vet School and SAC Consulting to monitor our progress. If we can demonstrate that ecological farming can deliver these outcomes, surely this MUST inform the debate?
Who am I? I’m just a tenant farmer, a father and a grand-father who’s concerned about what sort of world we will leave to our children. I’ve come on a very long journey of discovery from my early farm consultant days of enthusiastically recommending DDT, aldrin and various chemical cocktails, to become the much more ecological farmer of the past 10 years.
But I realise revolutions will only succeed when many ‘people’ become involved.
Does this sound the kind of revolution you want to get involved in? Would you like to take a share in our (happy) dairy herd?
We are launching our Community Supported Agriculture model called ‘Rainton Herdshare’. Rainton Herdshare will be a not-for-profit company that will own the dairy herd here at Rainton. You will have the opportunity to buy a share in the herd for £100. This share will entitle you to get a guided tour of the farm with me at pre-arranged times, to receive a quarterly update newsletter, a 50% discount on our family season ticket to our adventure playground at Cream o’ Galloway and 10% off all purchases of food there. And you will of course be the owner of a share of the herd. Dare I say it? You’ll be a farmer!
If Rainton Herdshare is successful we intend rolling out ‘Rainton Herdshare Plus’, where, for regular payments for the upkeep of your share of the herd, Rainton Herdshare will deliver your milk from your share of the herd to your door, free of charge! Under this arrangement it may even be possible for you to legally receive some or all of that milk as unpasteurised. . .
Interested? Get in touch by emailing me today. Be an agent for change!
http://www.creamogalloway.co.uk/finlays-farm/herdshare
David Finlay's family has been farming in Galloway for generations. His grandfather came to the farm in 1927, and the family made cheese here until 1971. David worked as a farm consultant for 10 years, returning to run the farm 25 years ago, and with his wife, Wilma, started ice-cream making and visitor attraction 20years ago. The ice-cream is sold mainly locally, but also through specialist retailers nationally, and the farm now produces small quantities of soft and semi-hard cheese. David and Wilma also welcome 65,000 visitors to the farm per year.

David and Wilma have farmed Rainton organically for 15 years, and have increasingly followed ethical business and life practices in that time. They have also won numerous green tourism gold awards, BBC Radio 4's Farmer of the Year in 2006, and a CiWF Good Dairy Award in2013.
40.714353-74.005973
hudson, new york