The following cross-post comes from Field Notes from Maggie’s Farm, the blog from the Learn to Farm Program at the Farm School, and serves as an announcement of an exciting ongoing future partnership between this program and the Greenhorns Blog. Today, Farm School student Sophie Mendelson gives us a compelling run-down of the current quiet bottleneck crisis in sustainable meat– and what to do about it.

Now in its 28th year, the Farm School in Athol, MA provides comprehensive educational programming in agriculture for youth, visiting schools, and adults. (Read more on their programming here!) Watch for more original posts on this blog from Sophie Mendelson, a student in their Learn to Farm Program, talented writer, and past and future farmer.

Know Your Abattoir: How to Keep Sustainable Meat Sustainable
by Sophie Mendelson

If consumers want local meat, they need to go to bat for local slaughterhouses.

At Adams Farm Slaughterhouse in Athol, MA, they play classical music on the kill floor. Cattle carcasses—seemingly as big as dinosaurs—hang by the hock from metal hooks fitted to a track in the ceiling that winds around the perimeter of the cathedral-like room. As the carcasses move along the track, they are divested of their blood, their skins, their internal organs, their heads, their hooves, and ultimately their integrity as a saw divides the animals neatly down their line of symmetry. This is how a “side” of beef is made.

The door to the holding pen opens and there is a great rattling as a cow enters the first segment of the indoor chute. A worker steps forward to urge the animal into the final compartment of the stunning pen, but this is a smaller cow, and instead of proceeding smoothly through the Temple Grandin-designed system, it begins to turn in the chute—an option not available to a larger animal. The worker attempts to redirect by prodding the cow from behind; metal clangs as the animal presses against the bars in resistance. The worker prods again, with little luck.

Noticing the commotion, another worker makes his way over to the chute. Instead of pushing from the rear, this man approaches the cow’s head. He reaches through the bars and strokes the cow’s chin. The animal stills. The man leans forward and appears to whisper something to the cow. Then, gently, he takes the cow by the ear and guides it into the stunning pen.

END_OF_DOCUMENT_TOKEN_TO_BE_REPLACED 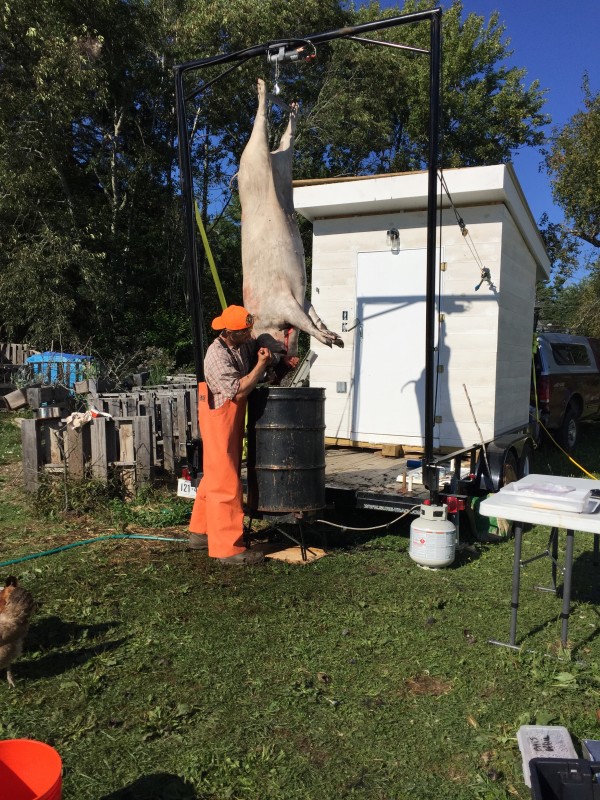 BROOKSVILLE, Maine — Rob Cushman believes there is a better way to kill farm animals than to load them in a truck and drive the anxious pigs, steers, goats and sheep to the nearest slaughterhouse, which in Maine can often be hours away.

That’s why he and Jake Hearst, both of Brooksville, have decided to turn their shared belief into a business. Blue Hill Itinerant Slaughter — known by many in the Blue Hill Peninsula as “A Kinder Kill” — is a mobile slaughterhouse that travels around the area to dispatch animals on the farms where they have been raised. While there are many such facilities in Europe and some in other parts of the country, they have not yet caught on in Maine. That is a shame, Cushman said.

In Maine, the bigger picture could definitely include more mobile slaughterhouses that would help farmers and homesteaders with the necessary and sometimes difficult task of killing their meat animals, according to Cushman and other local food supply activists. Under the Maine Department of Agriculture, Conservation and Forestry’s on-farm slaughter exemption, Blue Hill Itinerant Slaughter is allowed only to kill animals for the personal use of the farmer or homesteader that hired them. They are not allowed to butcher the animals, Cushman said, adding that the most they can legally do is quarter and chill the animal.

A recent NYTimes opinion article begs the public to support your local slaughterhouse. Why? Costs and regulations have caused a sharp decline in slaughterhouse facilities across the state. As a result, small producers in California are being included in a blanket recall for 8.7 million pounds of beef. 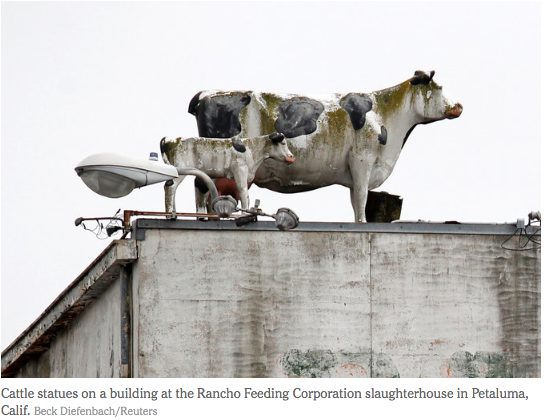 “Our beef comes from grass-fed cattle. We never use hormones; we feed no drugs. We know the complete history of each animal, from the identity of its mother to where it spent each day of its life. And we knew that all our own cattle received full federal inspections at the slaughterhouse, both ante- and post-mortem.”

Read on for more information