New Morning Farm are looking for an experienced Field Manager, who will be responsible for equipment, soils, crop establishment, etc.  The successful candidate will work with a great team, the best equipment, excellent soils and incredible markets.  This is the perfect opportunity that will allow you to see how your own decisions and efforts can result in high-quality, profitable, organic crops.  The salary is $33-36K to start, plus profit share. This position is ideally a long term position that may include the possibility of work-to-own.

New morning farm also offer a number of apprenticeships each year, click HERE to read more about their apprenticeship programme, applications will be processed this month so don’t leave it too long to apply!!

Please email jobs@newmorningfarm.net, if you are interested in applying.

Here’s something for all you artists, makers, communitarians, diggers (re:archaelogists) and generally strange people: Midlred’s Lane.

Residing on a site named for the homesteader that inhabited the space in the 20th century, a collection of individuals are experimenting with different ways of living/being/working/art making/formulating simply complex sentences. END_OF_DOCUMENT_TOKEN_TO_BE_REPLACED

We don’t often see mainstream media outlets report on the often invisible farm workers that hold up so much of American agriculture– let alone do in depth and humanizing interviews with them. So, in case you missed it, we wanted to bring your attention to a series created by Dan Charles for NPR’s The Salt in which Charles interviews the largely-Hispanic migrant immigrant workers on sweet potato, apple, orange, strawberry, and blueberry farms. Even for those of us who have worked on smaller-scale farms, a look into the lives of workers on these gigantic combines is both fascinating and critical. We can’t recommend a listen more highly.

You can read Charles’s summary of his findings here and follow his links to listen to each piece individually.

Attention Northeastern meat eaters! These beautiful farmers, and our friends, over at Cairncrest sell sustainably-raised, small-scale, hand-processed pork (raised on forages, local non-GMO grains, and whey from yogurt manufacturing) and 100% grass fed beef at locations in NY, PA, and VT. Highest quality meat from caring and skilled farmers. Order what you want online and choose a pick-up location!

They are also looking for individuals or groups who might be interested in setting up buyers clubs in the Hudson Valley. So if you are a passionate foodie go-getter in the that area, contact the farm! 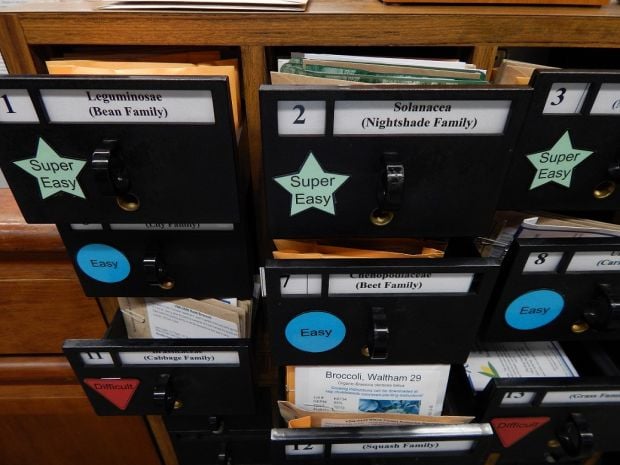 Department of Agriculture cracks down on seed libraries

CARLISLE — It was a letter officials with the Cumberland County Library System were surprised to receive.

The system had spent some time working in partnership with the Cumberland County Commission for Women and getting information from the local Penn State Ag Extension office to create a pilot seed library at Mechanicsburg’s Joseph T. Simpson Public Library.

The effort was a new seed-gardening initiative that would allow for residents to “borrow” seeds and replace them with new ones harvested at the end of the season.

Mechanicsburg’s effort had launched on April 26 as part of the borough’s Earth Day Festival, but there were plenty of similar efforts that had already cropped up across the state before the local initiative.

Through researching other efforts and how to start their own, Cumberland County Library System Executive Director Jonelle Darr said Thursday that no one ever came across information that indicated anything was wrong with the idea. Sixty residents had signed up for the seed library in Mechanicsburg, and officials thought it could grow into something more.

That was, until, the library system received a letter from the Pennsylvania Department of Agriculture telling them they were in violation of the Seed Act of 2004.

“We know that a lot of things contribute to poor nutrition and obesity but access is a key issue,” says Dr. Giridhar Mallya of the Philadelphia Department of Public Health. “People don’t have the ability to get healthy foods in their community at an affordable price. That makes it that much harder for them to be healthy overall.” See how The Food Trust and its partners are improving food access and health in Philadelphia and around the country.

Everyone deserves access to healthy food. Find out how you can get involved:
thefoodtrust.org
healthyfoodaccess.org

in the Pocono Mountains of Pennsylvania.
Cranberry Creek is looking for a Cheese Intern to join us through December, this 2013 season. This is an opportunity for the right person to learn the world of value-added goat dairy processing! Join us during an exciting time of development for this growing family farm.

Learn cheese processes; pasteurizing, safety protocols, handling the curd, basic milk/cheese chemistry and attuning your senses to judging and grading cheeses. Plus the crucial art and labor of affinage. Work side by side with the farm’s cheesemaker and owners every day. See playful goats every day in the woods of the Poconos.

Intern will learn not only aspects of making cheese but gain skills in the direct-marketing and how-to wholesale dairy. Attending farmers’ markets is required most weeks. Expect that opportunities to visit other cheesemakers for learning will be provided. END_OF_DOCUMENT_TOKEN_TO_BE_REPLACED

Willow Wisp Organic Farm grows a diverse mix of vegetables, herbs, and cut flowers on a 12 acre certified organic farm in the Upper Delaware River Valley (Abrahamsville,PA).   We are looking to fill 2 full-time and 2 part-time field work positions for the 2013 season starting in April.  Preference given to candidates with experience on an organic vegetable farm, but we will train the right candidates.  Salary commensurate with experience.  Send resume, 3 references, and letter of interest to:  greg@willowwisporganic.com  www.willowwisporganic.com

Dietz Produce farm is looking for an intern or two for 2013, any time between March and September. We are a small farm, with a diverse range of vegetables and small fruits in production on about two acres.

We also have a small flock of about 100 free range laying hens, a few pet goats, a pot-bellied pig, and a German Shepherd/Husky mix named Duke. We use natural methods, but are not certified organic.  Our farming is very small-scale, concentrating on manual labor for many tasks. This is a production-oriented farm, and it is crucial to the sustainability of the farm to get all the work completed in a timely manner. Punctuality is important, working steadily at a reasonable rate is expected. Conversations during work are encouraged as long as they don’t detract from the work. You can expect to do plenty of planting, hoeing, weeding, mulching, picking of fruits and vegetables. END_OF_DOCUMENT_TOKEN_TO_BE_REPLACED

We are now accepting applications for Internship Positions in our Agriculture Supported Communities (ASC) Program for the 2013 growing season.  The ASC Program is a modified farm share program offering affordable payment plans to make fresh, local, organic produce accessible to just about anyone in the community.