A coalition of farm organizations and their allies around the country are circulating the farmer statement on the climate crisis, viewable in the form here. This statement has been put together by the National Sustainable Agriculture Coalition (NSAC), an alliance of grassroots organizations that advocates for federal policy reform to advance the sustainability of agriculture, food systems, natural resources, and rural communities. Check out their comprehensive and impressive Grassroots Guide to Federal Farm and Food Programs, here.

Don’t be a rotten egg — please consider adding your name! The statement will be made public and sent to Congressional and USDA leaders. Your name and contact details will not be shared beyond listing your name, farm, town, and state on the letter, which will be shared publicly. 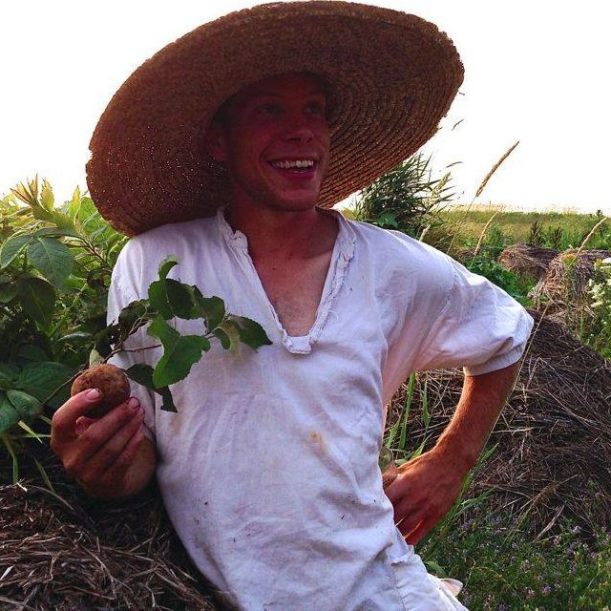 I met Kevin Morin in Ste-Anne-de-Bellevue, a town on the outskirts of Montreal, and home to some of the last vestiges of agricultural land on the island metropolis. At the time Kevin was working for the Cooperative farm Tournesol. Recently Keven and Nikaela Lange both won the Beingessner Award for Excellence in Writing for essays outlining hopes for the new farming economy. Below we have reprinted Kevin’s essay with permission from National Farmer’s Union and you can find both texts on the NFU site.

Kevin’s letter poses a question that I think many of us ask each day as we sweat and plant, weed and harvest, email clients, pour over spreadsheets and budgets, then pass out exhausted: is the current system of economic evaluation compatible with ecological agriculture and a sustainable future?  This last week I had the good fortune of seeing Dr. Vandana Shiva give the keynote address at NOFA Vermont and once again I was reminded that, like Gandhi’s call for spinning and making clothing by hand, farming is a simple but profoundly revolutionary act.

My Future Vision for Canada’s Farming and Food System

While talking about backyard cereal breeding, an old Cape Breton farmer once told me that the agriculture there was so far back that now they’re ahead. And if you were to have a cereal killer oatmeal stout from the Island’s own Big Spruce Brewing, you may be inclined to believe that.

I dream of a farm of my own someday, cows in the pasture, neat rows of cabbage…. Think of the rainy days spent in the woodshop, the brisk November mornings crouching in the greenhouse, a woodlot to keep me busy over winter and spring. To farm such a mixed enterprise like that of our grandparents is no romance. END_OF_DOCUMENT_TOKEN_TO_BE_REPLACED At the request of major peasant organizations, a group of scientists and agricultural experts sent a letter and document on the problem of genetically modified seeds to the Vatican on April 30, 2014.  Signed by eight experts from Argentina, Brazil, Mexico, India and Canada, the letter and accompanying document call upon His Holiness to speak out against the negative impacts of GM seeds on the world’s peasants and    global food security.    The document questions the scientific basis of GM technology, its failure to increase yields, the exponential increase in pesticide use, the dangers of transgenic  contamination of peasant crops, the threat to human health and the concern that GM seeds are patented and monopolized by a handful of transnational corporations. To read more and follow this letter’s progress, CLICK HERE—->