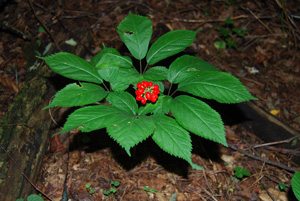 Join Ginseng Expert Bob Beyfuss on Wednesday September 13th from 5-8 PM for a classroom presentation designed to teach beginner how to get started growing their own American ginseng on forested land. The presentation will be followed by woods walk where you will see for yourself how to assess the suitability of a forested site for growing wild simulated ginseng.
The cost for the class is $25/person and you must pre-registration is required due to  the limited number of spaced. Participants will receive a copy of ‘The Practical Guide to Growing Ginseng’ by Bob Beyfuss.
To register please mail a check, payable to CCE Allegany County to: 5435A County Rd 48 Belmont, NY 14813 to register. Active or Retired NYS Military Veterans may apply for stipend to cover cost of attending.
For more information, please contact Lynn Bliven 585-268-7644 ext. 18 or email lao3@cornell.edu

This weekend, Friday August 25th – Saturday August 26th CCEE Livestock Educator Jason Detzel is running a 2 day hands on clinic on rotational grazing. Over the course of the weekend you will learn the practical skills necessary for implementing a rotational grazing system on your farm to improve the overall health and efficiency of your animals. Rotational grazing systems can also increase your profits by lowering feed costs, improving pasture swards, decreasing on farm labour requirements among a host of other benefits.
END_OF_DOCUMENT_TOKEN_TO_BE_REPLACED

Live on Heritage Radio’s Greenhorns Radio show this Tuesday, we’ll interview farmer Erica Frenay of Shelterbelt Farm in Ithaca New York. Erica also works for Cornell’s Small Farms Institute, and her bio on their page should give you an idea of how many rich topics of conversation this interview might follow.

Erica began working for the Small Farms Program in 2006. A former co-manager of Cornell’s student-run farm, she graduated from Cornell in 1998 and moved to Oregon to serve in AmeriCorps. Erica spent 6 years in the Pacific Northwest, working as Project Coordinator for an agricultural land trust and then as Executive Director of an urban educational farm in Portland. In 2005 she completed a 2-year program in Holistic Management. During her long and indirect journey back to Ithaca, Erica and her husband lived on a permaculture farm and nursery in the San Juan Islands for a year, and spent another year working on farms and building with clay and straw in New Mexico, Wisconsin, and Australia. They returned to Ithaca to settle down in the summer of 2005, and five years later started Shelterbelt Farm. Now she works part-time for the Small Farms Program and part-time producing sheep, beef, duck eggs, honey, fruit, and veggies on her farm.