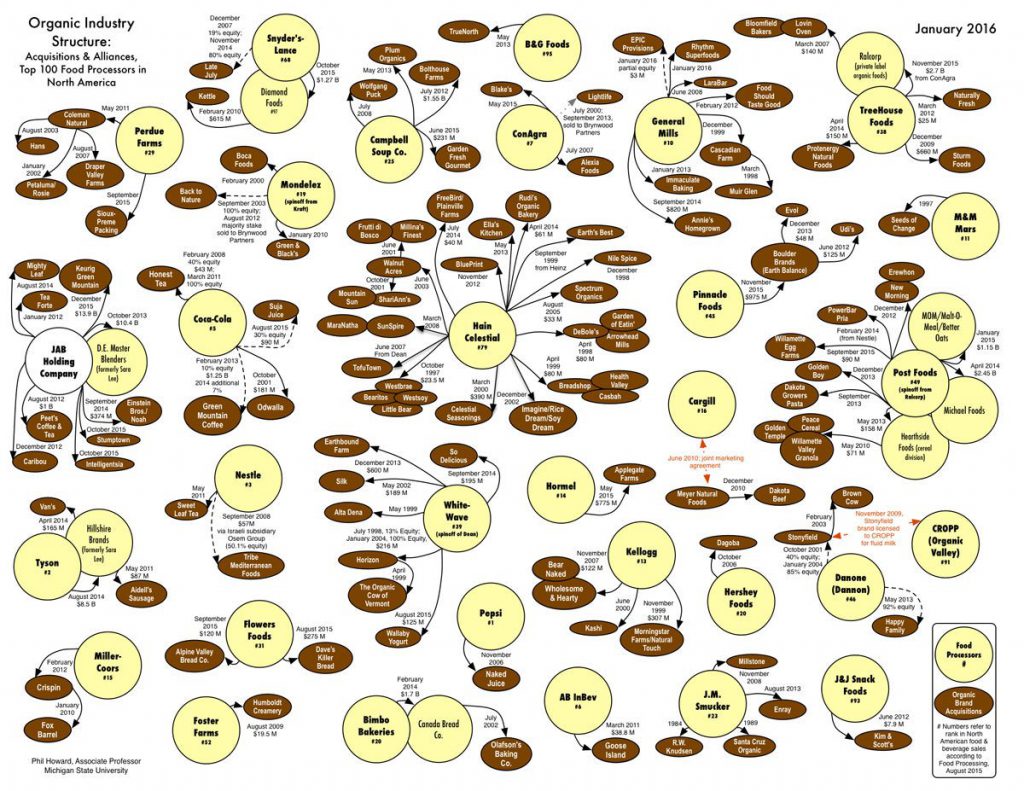 An updated version of Dr. Phillip H. Howard’s Who Owns Organic info graphic is now available here. When Howard, who is an associate professor at Michigan State University, first made the info graphic is 2012, a number of independent organic brands had been acquired by larger food corporations. Howard updated the chart because, as he writes, “A second wave of acquisitions has been occurring since 2012. Few companies identify these ownership ties on product labels.”

For those of you out there who try to be as social responsible as possible with your dollars, information like this may be overwhelming and, perhaps disempowering– but there’s a small silver lining in this story. For your sake, we’d like to note that Howard has a different chart showing major independent organic food brands and their subsidiaries. You can still feel good about supporting these guys! 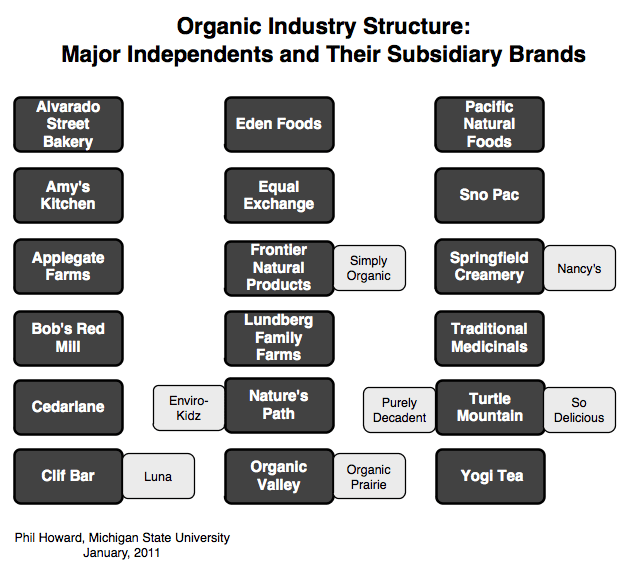 I wrote a blog entry a few days ago inspired by Michael Specter’s New Yorker article about consumerism, carbon consciousness, and carbon trading. In the post, I advocated the power of the consumer to demand greener practices from huge companies. But I left out some important players and aspects of the game, which Severine has pointed out here. The role of a consumer is more complex than power through spending — consumers are also individuals who eat, parent, live, and serve. And in American capitalism, consumers and corporations are certainly not the only players. 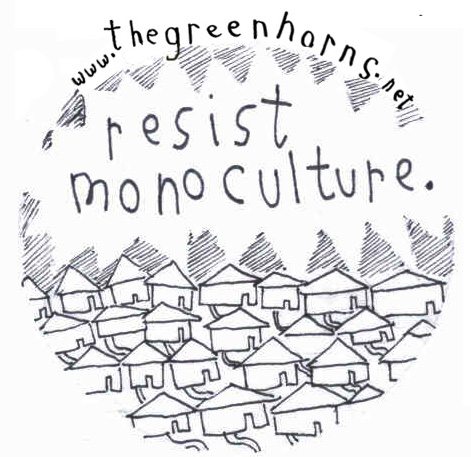 As a greenhorn, I choose to vote with my fork. But I also choose to vote with my life. No matter how many dollars I spend on “green” things, I would argue that land literacy, becoming embedded, herbal training, culinary skills, coping skills and the immersion into a community of relational reciprocity are equally powerful. Probably more powerful.

And it is that individual and collective power that we must exert if we are to absolve ourselves from our carbon-criminality, our agro-nihilism, and our toxic dependency complex. The companies don’t have the power. We do; we do when we seize it.

On consumer power in capitalism, The New Yorker article, while good in many ways, did fall into that trap of “npr think” which tends to exaggerate how social change is mediated by companies via traditional pathways and institutions.

What is often left out in the discussion of progress towards sustainability is the tremendous work of public interest non-profits and campaign groups who work to generate public distaste for environmental destruction. Rainforest Action Network is a key example. But similarly PETA, Greenpeace, Friends of the Earth, and other lesser known NGOs act as lightning rods, awakening public opinion on these issues.

Equal Exchange is not just providing a ‘green service’ to the churches that buy its coffee- the whole company is founded on the principle of fair trade. It is a cooperative. Its profits go to support the causes it fights for. The organism of the business is oriented around solution-making— this is very different to a “greened -up” mega corporation.

When Apple starts waving rhetoric around about its efforts, let it be remembered that they were pressured to do so not only by the informal and collective distaste of its user base, but also by a targeted campaign run by Silicon Valley Toxics Coalition.

The liability that these companies fear by appearing “brown” instead of “green” – the consumer pushback, the scarlet letter feeling– is perhaps not only a sign of mass consumer power–but also of the stark reality that in the absence of reliable regulatory frameworks, these companies are chiefly controlled by their legal liability and marketplace appearances. These companies routinely break local and federal environmental rules, they abuse their workers and the infrastructure that supports them. They behave ruthlessly.

But when a bunch of pesky litigators go through the tedious work to go down to the banana plantation and do all the depositions, test the water, and look at the health effects of the fungicide–well, then it becomes quite clear that the core values of the companies have not changed, and could hardly be called green.

We must consider that the greening of these big companies indicates consumer preference and market trend, not a redemptive or cathartic process. While the feel good lala land of green business is a great gateway drug, and in most cases represents a giant leap forward, our job is not only to consume wisely, it’s is also to act wisely and to serve wisely. Ours is a country devoted to the idea of the individual, and particularly to the choices that the individual can make. Particularly in times of transition, such as ours, where each decision we make has
a profound impact on the experience of future generations and thousands of species–let alone the atmosphere–that choice becomes hyper-important.