New York City’s newest urban farm will look a little different from most: instead of factory-like rows of plants growing in a warehouse, it will be a lush, natural-looking food forest that floats down the Hudson River in a barge.

As it docks at local piers this summer—stopping at each pier for at least two weeks—New Yorkers will be able to get on, wander around, and pick free food.

The farm-as-art-project, called Swale, is on the water for a few reasons. The first is practical. Food forests are a type of community garden that mimics a natural landscape, and that anyone can freely harvest. Though they exist in a few other places, such as Seattle, they’re illegal on land in New York City. But by putting Swale in the Hudson River, the artists who created it were able to sidestep that regulation.

For 3 years, the commercial development project that is slated to pave the southern 7 acres of the historic Gill Tract Farm has been held off by a lawsuit.  On June 16th, the courts ruled in favor of the UC, citing that their polluting, privatizing, pavement project breaks no state laws, clearing the way for the planned development to begin.

Protesters will hold a rally at the corner of Monroe Street and San Pablo Avenue at 4pm, next to the 7 acres in question.  They will begin with a series of speaker addressing the many issues at hand.

Promptly at 5pm, protesters will begin their planned direct action, using creativity and art as some of the tactics.

END_OF_DOCUMENT_TOKEN_TO_BE_REPLACED

Check out the rad folks at the Urban Orchard Project, based out of the UK. They are an organization devoted to creating, restoring, and celebrating fruıt orchards in London and beyond. The video above provides a quick lesson on pruning old fruıit trees, and they provide more invaluable advice on their webpage.

Remnant Orchards, or what remains of traditional orchards, are valuable and often overlooked resources. They often have high genetic and bio diversity; can serve as food sources to urban populations; foster local character; and help make city spaces more pleasurable to inhabit. The Urban Orchard Project works wıth communities and activists to restore the health of these orchards by extending the life of old trees while newly-planted trees become established. This has the compound effect of providing continuous and long-lasting habitat for wildlife and producing food for human consumption.

In Japan, Idled Electronics Factories Find New Life in Farming
Struggling to Compete with Rivals in South Korea or China, Fujitsu, Toshiba and Others Try Selling Vegetables, Too
By Eric Pfanner and Kana Inagaki, July 6, 2014

“Starting tomorrow, you are going to make lettuce,” he recalls being told.

Amid troubled times in the Japanese electronics industry, Fujitsu shut one of the three chip-making lines at the plant in 2009. Now, in a sterile, dust-free clean room that once built the brains of high-tech gadgets, Mr. Miyabe and a staff of about 30 tend heads of lettuce.

A whirlwind of energy and ideas, Stephen Ritz is a teacher in New York’s tough South Bronx, where he and his kids grow lush gardens for food, greenery — and jobs. Just try to keep up with this New York treasure as he spins through the many, many ways there are to grow hope in a neighborhood many have written off, or in your own.

An interesting model in Vancouver.  They’ve raised 30% of their goal so far.  Check it out! And pitch in if you can.

Soul Food has a plan to double Vancouver’s local food production.
If you would like to see more beautiful, delicious and healthy food grown right in your neighbourhood, help us set up two new retail locations.
With retail outlets in place, we will create the capacity to significantly expand our farming operations in the next few years – growing into one of, if not the largest, urban farm in North America. That is to say, your one-time cash injection will help Sole Food significantly scale-up the urban farming movement.
But wait, there’s more: One of these locations is set in the Downtown Eastside, which will offer “pay-what-you-can” organic produce in order to bridge the gap between those who can afford our food and those who cannot.
In order to do this, we need to raise $100,000. Our start-up costs include renovation, marketing and merchandising materials, inventory, staffing, and cooling and storage infrastructure. If we make our goal we will immediately begin work to open the farm stands for the summer of 2014.

BALTIMORE, Md. — In Sandtown, Douglas Wheeler looks out with satisfaction over the abandoned city-block-turned-farm where he works growing all sorts of greens and lettuce — “but never iceberg” — and remembers how it used to be.

“This lot was a garden of trash,” he says. “With rats all over the place.”

Before they were demolished in 2005, the block had 27 row houses, most of them long boarded up and abandoned, transformed from icons of Baltimore pride to casualties of the blight brought on the city by deindustrialization, unemployment, addiction and the war on drugs.

Until the 1960s, Sandtown was part of the vibrant 72 square blocks that made up a family-based, African-American community where laborers, professionals and artists all lived together across socioeconomic lines. The quarter took its name from the horse-drawn wagons that would trail sand through its streets after filling up at the local sand and gravel quarry. Thurgood Marshall graduated from Sandtown’s Frederick Douglass High School, locals Cab Calloway and Billie Holiday sang in the legendary jazz clubs on Pennsylvania Avenue, and any kid could get some wood, build a box and make a few bucks on that main drag shining shoes. 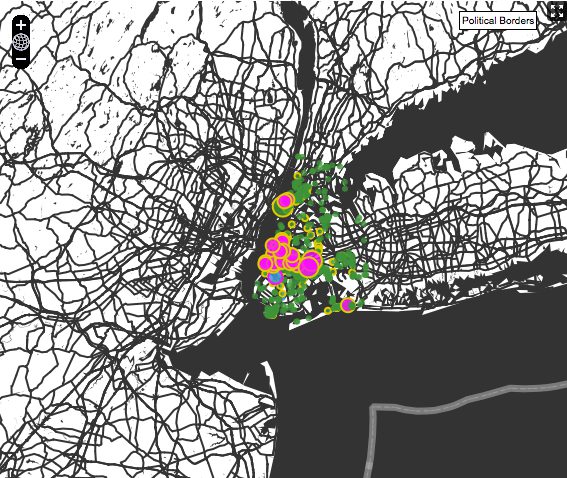 596 Acres.org
This map shows sites of potential community projects. We have taken several different sources of information about vacant publicly owned land, chosen the most accurate information from each and shared them here. This is our commons. We also add few private lots whose owners have volunteered their land for community use.

We’re creating a practice of building online tools neighbors can use to clear hurdles to community land access. The tools turn city data into information about particular pieces of land and connect people to one another through simple social networking functions. END_OF_DOCUMENT_TOKEN_TO_BE_REPLACED