Much afoot in March for us young farmers, much underfoot too.
Snowdrops from where I sit, and frisking squirrels shuffling acorn dregs.
And geese flying south over the Hudson. And saucy springtime birdsong.
And so many logistics, mis-matching bolts, awkward voltages.
Spring is uncoiling, and we Greenhorns are in full gallop coordinating the COMMUNITY DISTRIBUTION of our DOCUMENTARY FILM. 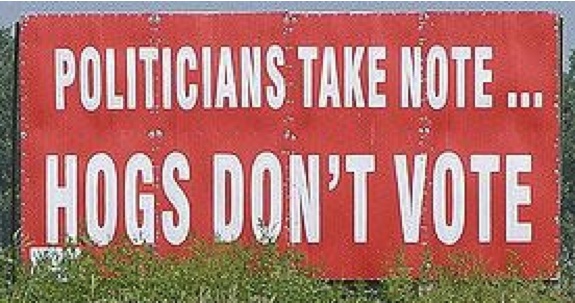 Those lawmakers up there on the hill seem to have forgotten about us young farmers over winter.  Last week, ATTRA, the National Sustainable Agriculture Information Service which provides an invaluable trove of information (including our national apprenticeship listing) and expert technical assistance to farmers, lost $2.8 million in funding.

This cut was adopted by Congress as part of a Continuing Resolution, basically an extension of the 2010 fiscal year budget to keep the government operating until April 8th.

This news comes to us from the National Sustainable Agriculture Coalition. The National Young Farmers’ Coalition is a member organization and we  encourage you all to join NSAC’s mailing list to receive pertinent updates such as this.

We have few precious days to act.

Contact your Congressman/woman today (http://www.congress.org) and tell them to restore ATTRA’S funding in the next Continuing Resolution.

Call or write, leave a bold impression, and pelt them with celeriac.  Here’s what we have in mind for beginning farmers:

“I want to farm, you need farmers. By cutting ATTRA’s funding, you and your fellow Congressmen and women have just imperiled the organization that hosts the nation’s most comprehensive list of agricultural apprenticeships. Without that list, we cannot find our next farm job, which hinders us from taking the next step to becoming a professional farmer. This is a disservice to the future of agriculture in America and to your constituents’ ability to join a critical sector of our economy. Restore ATTRA’s funding in the next Continuing Resolution.”

Film is out and screening. We are BARELY able to keep up with the increase in emails, interest, reporters.

We ended up not being able to afford to do color correction, but have decided to be OK with that. Perhaps once we’ve sold a bunch of DVDs and get a few more grants we’ll go back and digitally enhance the already radiant young farmers. Maybe. Maybe it can be a stylistic low budget choice.

In case you didn’t already get the memo, we are distributing the film ourselves. This is called COMMUNITY DISTRIBUTION. Which means that if you want to see it, you can look on the website for the REQUEST A SCREENING link. Whether you already have a space in mind to host a screening or just really want to see the film, fill out the form and film outreach coordinator Patrick Kiley can help you conceive and execute a community screening. And keep checking our events page to see who’s hosting a screening near you.

Press releases and PUSH out we are waiting to do at the tail of our little southern mission, so that means mid-April. That is also the time when we roll out our new website.

If you are a longtime listserv-member, mixer attendee, blog enjoyer, and you want to find a way to help us out in our SUPER grassroots distribution campaign, here are some things to think about for late April/May and BEYOND.

1. If you aren’t already farming…START.

3. Contact Patrick (film@greenhorns.org) if you would like to help with the greenhorns film and event outreach more long term.
4. If you need help finding other young farmers to organize with, use our map, Serve Your Country Food.

Sorry–these are boring logistics, but frankly grassroots is a lot of logistics.

RADIO UPDATES
Wonderful new farmers on the radio podcast are broadcast now! Catch up on the two latest episodes (#68 & #69) with an organic cotton farmer in Texas, Eric Herm, who recently published the book “Son of a Farmer, Child of the Earth,” and with a Midwestern urban farmer in Indianapolis, Matt Jose. 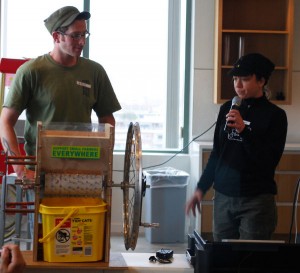 FarmHack at MIT was super awesome. You can watch the video here. But frankly the video is long; an easier way to get involved in technology exchange would be to tune in to the FarmHack blog.

I’m currently sitting on the shores of Otsego Lake doing a screening with the FARMERS MUSEUM. They have a super cool museum here: a village of    historical buildings housing blacksmiths, print shops, heritage breeds, implement collections, coopers, carpenters, bee keepers. Apparently the central New York region was on the forefront of the modern beekeeping movement back in the times — and pioneered the Langstrof method that is prevalent today.

Food Justice out in Oregon was super awesome, I got to meet Vandana Shiva. You might have seen the article in New York Times about Oregon’s young farmers culture emerging. We also made a short little profile film of Clint Lindsey A2R Farms. And the Just Food CSA in NYC Conference was good fun as well. You can catch up via the video here. Great event this past weekend in New Hampshire at the Wild Miller Gardens at Tuckaway Farm, brick oven pizzas from Flatbread and delicious locally sourced beers from Throwback Brewery.

Thank goodness farm conference season is winding down, it’s been quite a hustle of Panels and Mixers and Screenings and Driving across many states. Good mailing lists, good rosy cheeks, lots of beer!

UPCOMING EVENTS
BIG tour still up ahead in the South and Northeast in April. Then Midwest tour in July. Northwest/Cali/Southwest sweep in October/November.

ALSO…It’s Not Too Late to Register for the No Farms No Food Rally & Lobby Day
March 30, 9:00 to 4:00, Empire State Plaza, Albany
Register online here:
http://newyork.farmland.org/no-farms-no-food

Join farmers, local food advocates, town officials and hunger relief volunteers to meet with legislators at the State Capitol about the critical importance of farms and food to New York State. 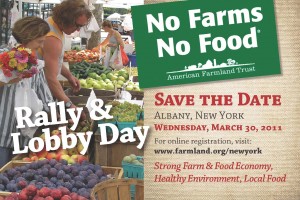 SO…what does all of this mean for you? Well. If you live in those places and want to coordinate with us to rally up a posse for an educational session, for a galvanizing conversation, for a screening, a bonfire, or some beer? Please indicate as much on the web-form. Patrick is keeping up with that impeccably. By filling out that form you help us keep your contact information handy, not scattered in a gmail somewhere. Thank you…

Seed Circus touring also starts in April, many in conjunction with museums and artist types. Our call is still open for entries so send us your most creative brainstormings.

7 May 2011
NEW YORK, NEW YORK
@ the new museum festival of ideas for the new city

Thank you all so much for being a part of this community of practice.

With MUD crusts and dirty snow,