The next three posts are Severine’s travel journals from a swoop she just made visiting farms in the midwest, seeking out young farmers and sleeping in their greenhouses in Tennessee, and attending a conference in Georgia, among many other agrarian investigations and pursuits.

I arrived in Iowa just after a little snow, and just before a big one. I was flying in from the hilly Wisconsin and expected a great flatness– instead I was surprised by the wide bluffs and fantastic expansiveness of the countryside. 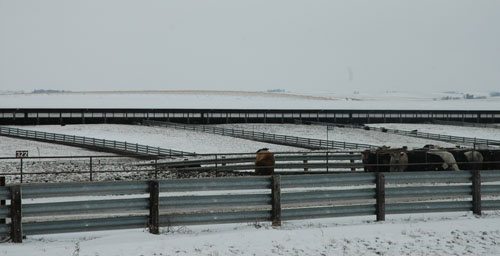 From the moment I left the airport I was shocked by the barbarity of corn cultivation. Since many of the farmers practice “chemical no-till” here — the relic stalks of last year’s epic corn season could be plainly seen over the crust of snow. Acres upon acres upon acres of corn. Over and over you could see silos standing forlorn, cattle infrastructure abandoned– farmyards falling in on themselves, scattered with flotsom. Over and over you could see how the tractors had plowed into the gullies and streams– had plowed up pastures still surrounded with barbed wire, had plowed right up to the houses that remained. 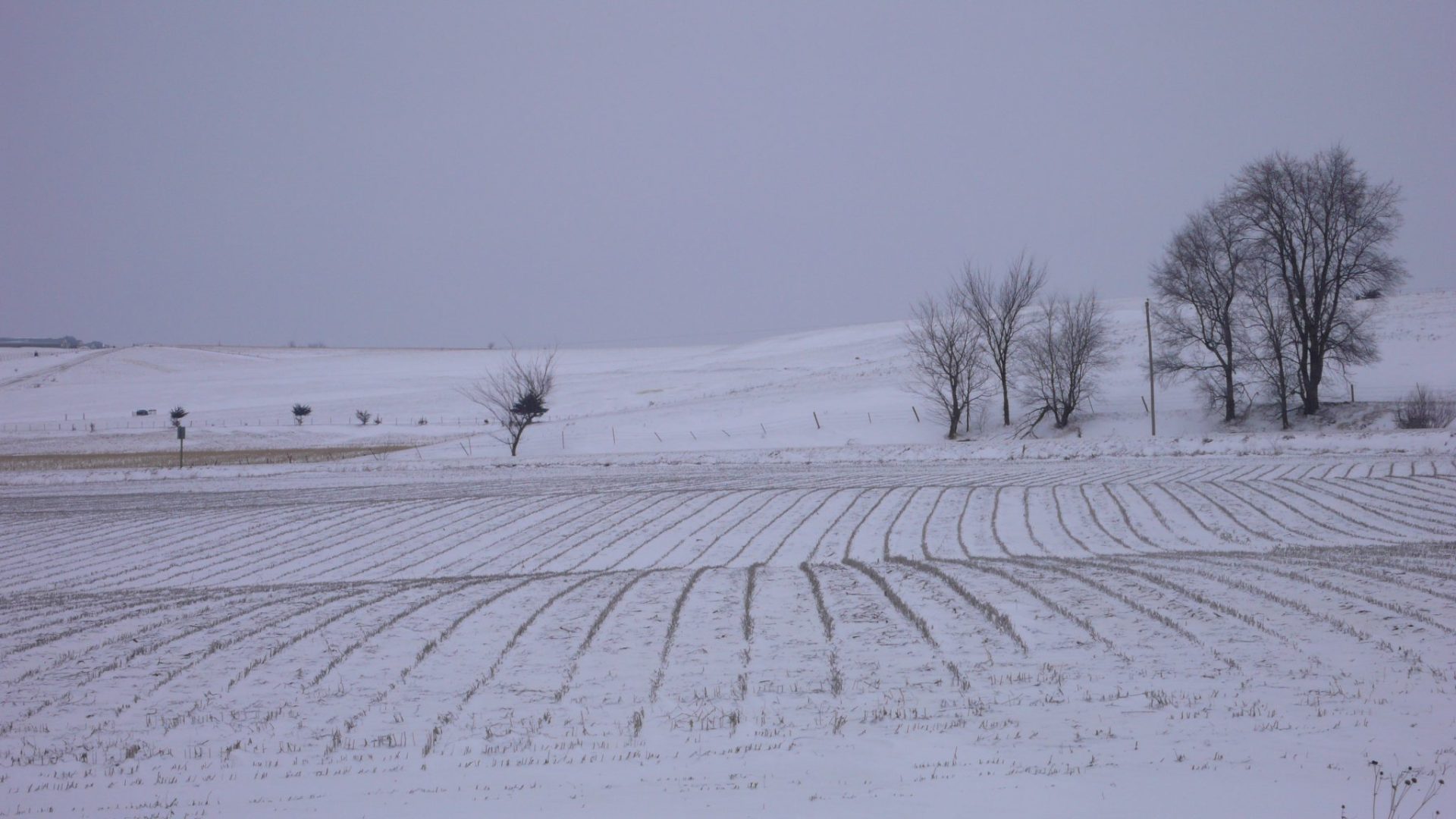 On my way to Atlantic, Iowa I passed thru the town of Anita. I squeezed through tight little brick main street with the granary behind it–one road thru town with the tiny slaughterhouse, the cattle auction, and steakhouse–all within a mile of each other. American flags flying above each one, a perfect example of the scale of local food system, in a sea of maize monoculture. 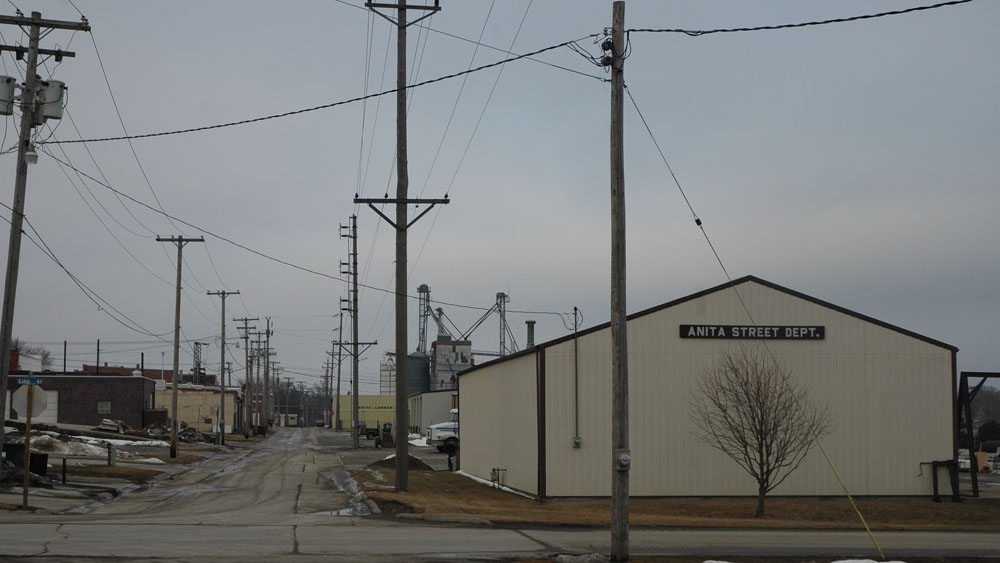 The town was practically empty, as were many of the small towns I drove through. But such perfect little shop-fronts, with worn gold lettering and sweet old men in blue caps sweeping the sidewalk of snow. These are the kinds of towns that could so easily host an affordable revival- a local grocery, an arts center/gallery/music space, a workshop, a studio–if the right few dozen pioneers mustered the gumption to blaze a trail there.

I arrived in Atlantic in time to walk the farm before sunset. A few acres of rye, a few acres of orchard, a fantastic sloping old barn, flitting junkos and cardinals sweeping across the front yard. 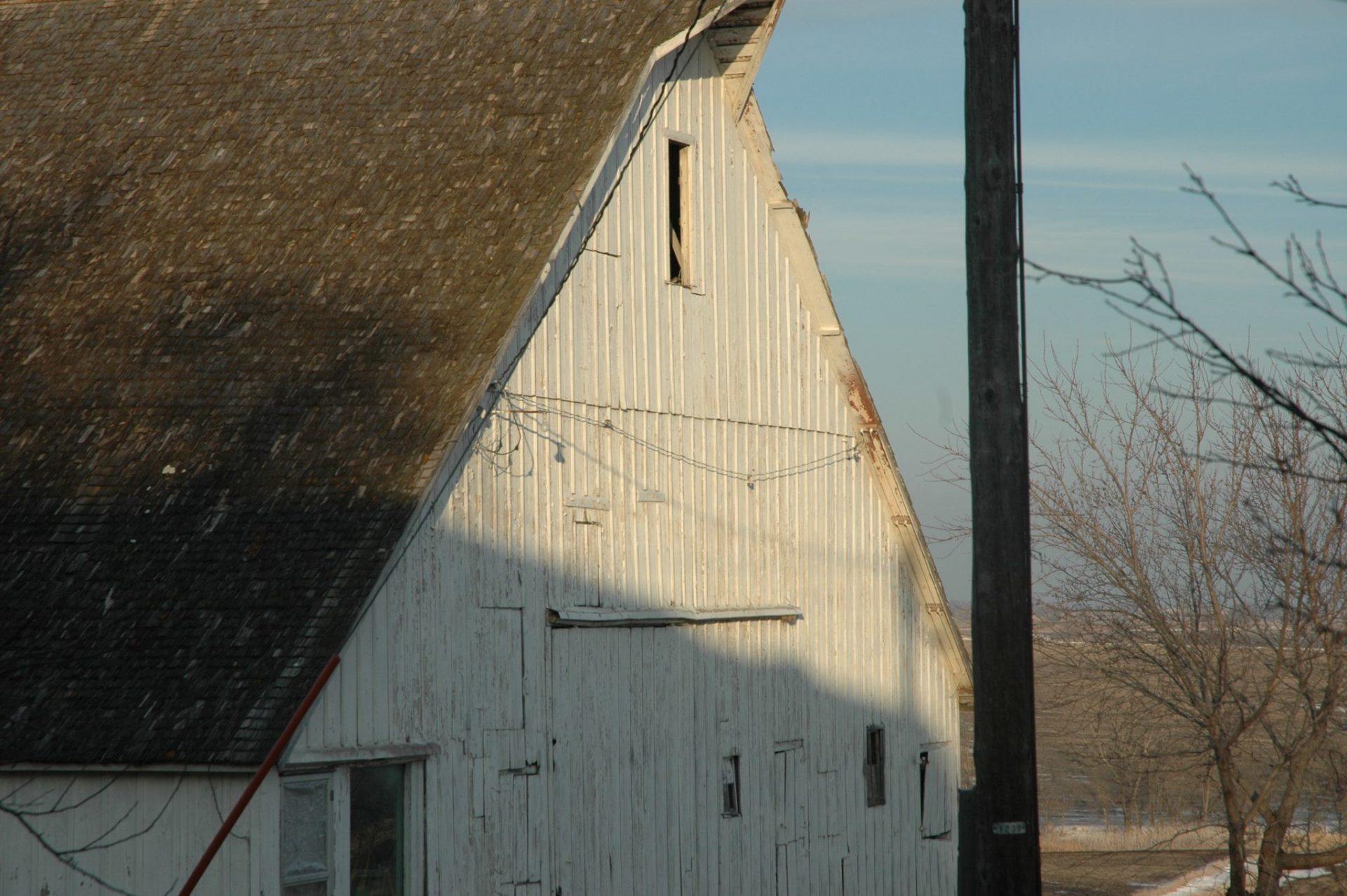 Denise O’Brien and her husband Larry farm 16 acres just north of town; they have been farming organically for more than thirty years. Denise runs a program called WFAN Womens Food and Agriculture Network, where she works especially to help Women landowners connect with sustainable farming tenants. Denise is the queen networker of Iowa–and the dearest mother-hen to the many projects, farmers, and visions that swirl around her state. 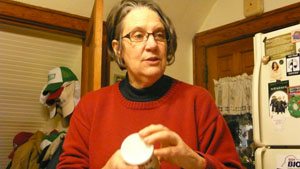 Denise once represented the farmers of the world to the United Nations- she gave a speech composed from many of the peoples movements of the world, in solidarity with Via Campesina, rural women and traditional farmers. Just last year Denise ran for Secretary of Iowa in a home-made biodiesel bus (processor on board) and hosted John Edwards during the Iowa caucus. It was a great pleasure to be in the company of such a legendary member of the food-movement, and to watch how deftly and joyfully she corresponded on issues of national significance from the Iowan hilltop.

A few random encounters in Iowa somehow gave me the taste of how the caucuses may have been. I was in the produce section in the natural foods market in Des Moines. I had been meeting with Matt Russell of the Drake Agriculutural Law Center, and had a big day of airplanes ahead of me. So I was doing a little dance in front of the apples to get my blood moving and singing a little apple song. An elderly fellow came up to me and started shaking my hand, telling me about corn textile, inviting me to his family’s farm, Niman Ranch Farm, telling me how much faith he had in my vision and in my generation. Probably he just wanted to flirt.